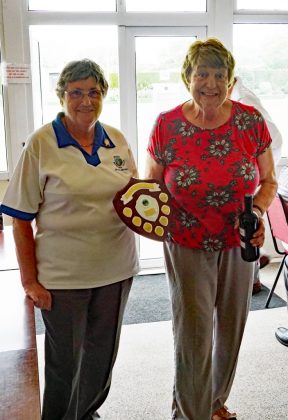 A spider competition was held before the start of the match and the bottle of bubbly was won by our own Pam Weatherington – Well done Pam!

Fierce competition between the clubs was enjoyed throughout the afternoon by players and spectators alike. A damp finish to the afternoon however,did not put off those playing and then enjoying a barbecue after the match.

This year, the winning team was from Oundle Bowling Club with a massive score net score of 20 shots after deducting a handicap of 15 shots! Congratulations to Molly Bostock, Mary Hull and Glenroy  Graham ( a new member,not pictured) for their win.